Aquaculture contributed 12.97 percent of total food-fish for human consumption in 2017 and is expected to grow further to meet the future fish demand of the country. National output of food-fish has grown tremendously over the past 12 years, from 1.34 MT in 2007 to around 223.62 mt in 2018. The 2018 production is valued roughly at Nu. 44.72 million. Among the fish producing Dzongkhags, Samdrupjongkhar dominates with a production share of 30.97 percent by volume and 6.19 million by value. The rapid growth in the Dzongkhag is thought to have been driven by a variety of factors, including pre-existing aquaculture practices, population and economic growth and favorable climatic conditions. 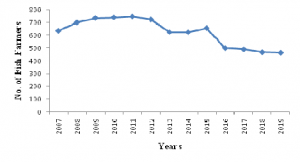 Figure 1: No. of Fish Farmers during last 12 years of aquaculture 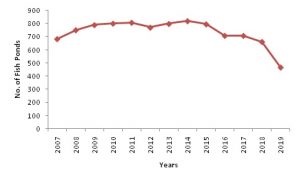 At the moment, consolidated fish pond area of Bhutan stands at 24.32 hectare. The area includes backyard undertaking category starting from 415 m2 in Trashigang to 78639 m2 in Sarpang of which some ponds are semi-commercial type (Figure 3). 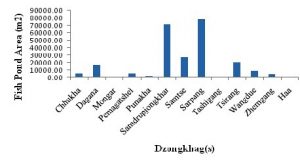 Today, there are sixty two Geogs undertaking backyard to semi-commercial scale carp production and two Geogs for trout production. In total 64 Geogs are actively engaged in diverse types of aquaculture systems in 24.32 hectares of total fish pond area.  These Geogs are spread over 13 Dzongkhags (Figure 4). 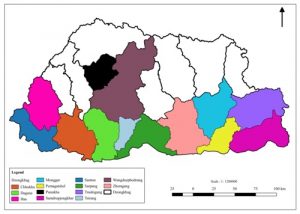 The Bhutanese aquaculture sector faces a variety of challenges such as personal sentiment against fish culture as being a sinful enterprise, limited suitable landholding, climate change adverse impacts, under-developed aquaculture support service delivery competence and stringent wetland policy that deter fish pond construction. These constraints notwithstanding, Bhutan’s output of food fish has seen a remarkable growth in the last few years. Wherever feasible, NR&DCA has support carp production with meet fish food in the country. The production trend indicates that aquaculture is going to grow in the future. In 2018, Bhutan’s domestic fish production was 223 mt with 165.89% growth rate over 10 years from 1.34 mt in 2007 (Figure 5). 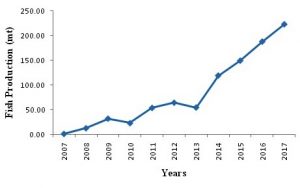 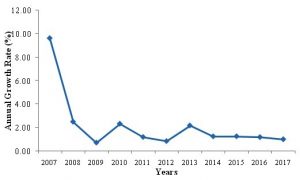 To meet the demand for seafood, Bhutan continues to import fish and fish products from India and other countries (Figure 7). However, the import trend has been declining with the gradual increase in domestic production but import is most significant at the moment in the country. 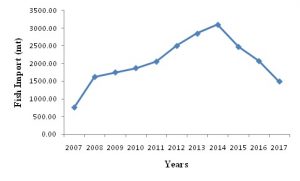 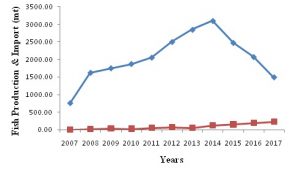