The varied forms and fascinating beauty of some fishes have attracted the people from time immemorial and are named as “Ornamental fish”.Ornamental fishes are often called ‘living jewels’, this is because of their attractive colors, shapes, behavior, and sometimes peaceful nature (Jayansakar, 1998). The culture of ornamental fishes is called as aquariculture. The ornamental species are categorized into indigenous and exotic. There are more than 30,000 fish species reported around the world, of this about 800 belong to ornamental fishes. Most of the ornamental fishes survive in freshwater. They come under eight closely related families namely, Anabantidae, Callichthyidae, Characidae, Cichlidae, Cobitidae, Cyprinodontidae, Cyprinidae and Poeciliidae.

The most common ornamental fish known as goldfish (Carassiusauratus) makes the highest population in the Centre. Gold fish is a freshwater fish belonging to the family Cyprinidae of order Cypriniformes. Goldfish breeds vary greatly in size, body shape, fin configuration and coloration.

NR&DCA intends to produce thousands of high live qualities of fingerlings to start a venture of Ornamental fish farming in the country. In the near future, the Centre is planning to produce these fishes in a large scale and also to provide opportunities for the certain groups of people especially for school dropouts, woman, enthusiastic fish farmers and unemployed people to take up as a small business to enhance their livelihood. Providing hands-on training to farmers and school dropouts on ornamental fish breeding, management and aquarium construction are also in the pipeline. 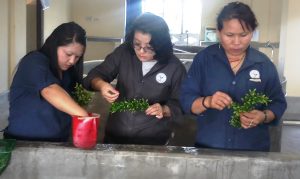 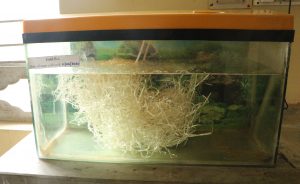